The Secret Garden of Sambangan (As a Solo Traveler)

About the Secret Garden of Sambangan

How to Get to the Secret Garden of Sambangan

I went to Aling Aling and the other waterfalls when I was staying in Lovina. From there, it is about a 20-minute ride on a scooter. Beware, that it might be hard to find a GRAB/GOJEK in Lovina if you – like me – don’t have a scooter. I saw dozens of GRAB drivers the day prior, so I didn’t think it would be a problem. When I tried to order one in the morning though, it only found one driver who kept asking me to cancel.

If you’re coming from Ubud, you should probably plan to drive for three hours to get to the Secret Garden of Sambangan, from Canggu even longer. If you don’t have a scooter, you can also (apart from hiring a driver, obviously) join a tour. There are plenty of companies that offer different packages. I wouldn’t recommend that though unless it is a really good deal including the drive there. Let me tell you why.

What to Pay at the Secret Garden of Sambangan

There is the possibility to pay IDR 10k (0,57€) for just walking inside and taking pictures at the Secret Garden. You’re not allowed to go into the water of the waterfalls with that option, though. If you’d like to swim/jump/slide (which I highly recommend!), you have to get a guide. This is not a rip off situation, as you really need one to know where it is safe to jump and what to pay attention to.

If you go to the Secret Garden of Sambangan directly, you’ll find prices as shown in the picture below. This is obviously much cheaper compared to taking a tour. If you’re a solo traveler like me, this is still annoying as you have to pay 200k (11€) instead of 125k (7€) for the shortest trek. That’s why I decided to just wait at the entrance to tag along with someone else. 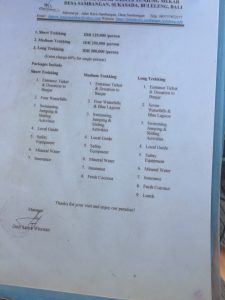 After ten minutes of waiting, they offered me to go inside alone for the same price. I just had to take a junior guide who wasn’t as experienced and was still learning to speak English. Obviously, I was more than okay with that and my guide ended up being super nice, very helpful and considerate, and his English skills were more than enough.

I don’t know if that’s guaranteed to happen or if I was just lucky (after all, I had a really nice conversation with the locals at the entrance while waiting). But it’s definitely worth the shot to just ask for a junior guide if you’re by yourself and don’t want to pay the extra 60%.

When to Come to the Secret Garden of Sambangan

The Secret Garden opens at 8:00 am and originally, I wanted to be there right at that time in order to arrive before all of the organized tours. Because of some trouble getting there (that is, not finding a driver), I didn’t arrive until 8:40 am. However, I was still their very first guest of the day.

Most tours start their hikes at around 9:00 am, so I’d definitely recommend arriving at the Secret Garden sooner. I had the whole place to myself (well, apart from my guide) for the first half hour and it made the already incredible experience even more special.

From the entrance of the Secret Garden of Sambangan, you’ll walk around 10-15 minutes to the first waterfall, which is Aling Aling Waterfall. It is very impressive and you can get down to a viewpoint to take awesome pictures.

However, because it is holy, it is not allowed to swim in Aling Aling waterfall. That’s too bad because it really looks nice and the water is so clear. But don’t you worry – there is so much more fun to come! 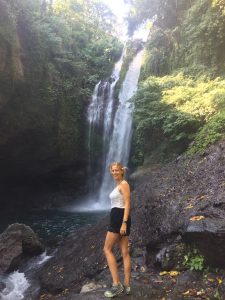 After a very short walk, you’ll arrive at the next waterfall. The other three waterfalls are all within seconds of each other. Kroya is the first one.

Kroya waterfall also makes for a nice photo spot as they put some inspirational quotes next to a platform you can also jump from. Then, it’s time to get real. You can leave your bag in a box (not locked) and hang your clothes on a pole as it is about to go down. 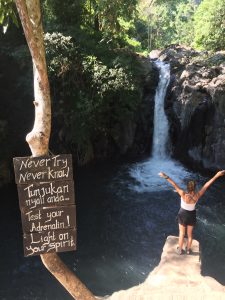 The picture spot opposite of Kroya Waterfall is also your first jump of the day. With just 5m this serves as a warm-up. Before getting to the Secret Garden of Sambangan, I had never jumped from higher than 3m. So this was already a challenge for me and I thought it would be my biggest one of the day. Oh boy, little did I know…

Some people do this right after doing the 5m jump opposite of Kroya waterfall. Me and my guide went to Kembar and Pucuk waterfall first. It worked out perfectly because when we got back, there was another couple with their guide. So after jumping down the 5m again, my guide went to the top of Kroya waterfall with us, while their guide videotaped the whole thing from the platform.

The walk to the top is just about 2 minutes. If you haven’t already, you’ll put on your life jacket there. Your guide will then hold you, while you sit down in the water and cross your arms in front of your chest. He will then give you a little push and let go – and off you go! 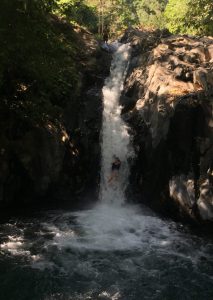 This slide was so much fun but also scary because there is a drop at the end. You can go as many times as you want (well, at some point your guide will probably stop you). 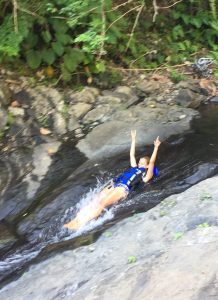 You can jump down from 10m right in between the two waterfalls. I honestly didn’t think I would do it. But I stepped outside of my comfort zone and jumped all the way down. Watch me freaking out before jumping below. Also, take a look at my feet! My guide laughed at me and told me I looked like a dog.

Video 10m Jump Kembar Waterfall
Disclaimer: The Video has to be loaded all the way before it can be played

The feeling after bringing myself to jump was amazing. I’m glad I was wearing a life jacket though, as I still plunged quite deep underwater. 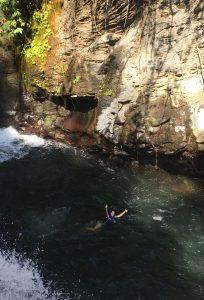 This one is the last of the four waterfalls at the Secret Garden of Sambangan. I didn’t get a good view at the waterfall as we were standing on top of it, but it’s also a nice waterfall. 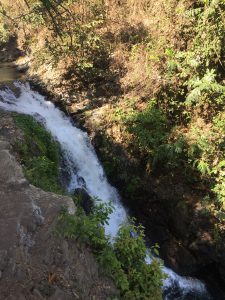 There’s a spot very close to Pucuk waterfall where you can jump down 15m. I decided not to do it because 10m was already enough for me. In addition, you have to jump out two to three meters because there are rocks at the bottom. And I didn’t dare to do it. But if you have more courage than me, this looks like an awesome spot.

Good to Know About the Secret Garden of Sambangan

I would totally recommend going to the Secret Garden of Sambangan for a day trip, as you might have picked up on. Here are some things that might be useful to know before you go:

My visit to the Secret Garden of Sambangan is one of my favorite activities in Bali so far. So if you have a chance, definitely check it out!

8 Places to Go to on Nusa Penida

10 Things to Do In And Around Ubud

Your Vegan Food Guide to Ubud

Your Vegan Food Guide to Canggu

My First Weeks in Bali

My name is Katja. After just finishing my Bachelor's degree in Psychology, I decided to pack my backpack and travel the world for the next nine months. Join me on my adventure!